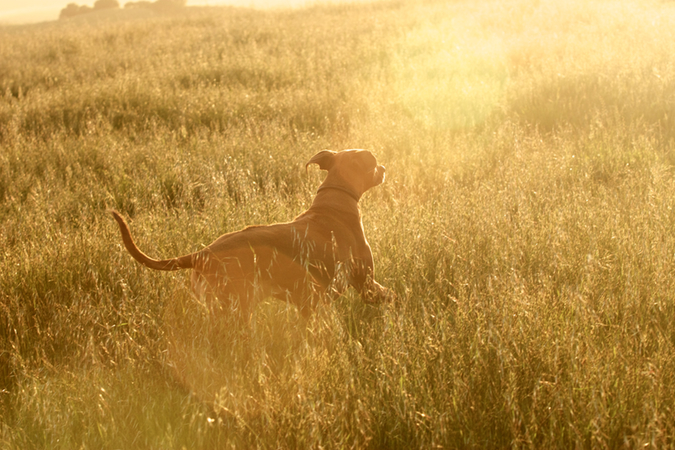 The way the dog trots out the front door
every morning
without a hat or an umbrella,
without any money
or the keys to her dog house
never fails to fill the saucer of my heart
with milky admiration.

Who provides a finer example
of a life without encumbrance -
Thoreau in his curtainless hut
with a single plate, a single spoon?
Ghandi with his staff and his holy diapers?

Off she goes into the material world
with nothing but her brown coat
and her modest blue collar,
following only her wet nose,
the twin portals of her steady breathing,
followed only by the plume of her tail.

If only she did not shove the cat aside
every morning
and eat all his food
what a model of self-containment she would be,
what a paragon of earthly detachment.
If only she were not so eager
for a rub behind the ears,
so acrobatic in her welcomes,
if only I were not her god. 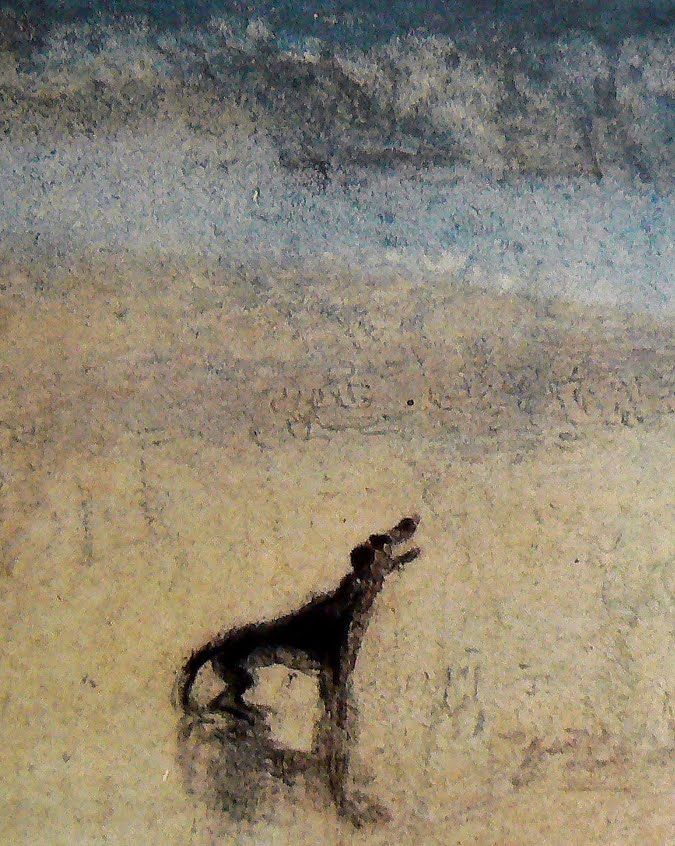 … I absolutely believe,    when my yard dog barks at night,    and I can hear the dog at the next farm also bark,    that the next dog's bark is answered by one farther up the line,    and so on until    the bark travels all around the world.
That is why, after relaxing into the quiet of the night,    my rest is again disturbed by my dog barking.    The bark has come all the way around,    as has the night.
- Raymond & Lorna Coppinger    Dogs:  A Startling New Understanding of Canine Origin, Behavior & Evolution 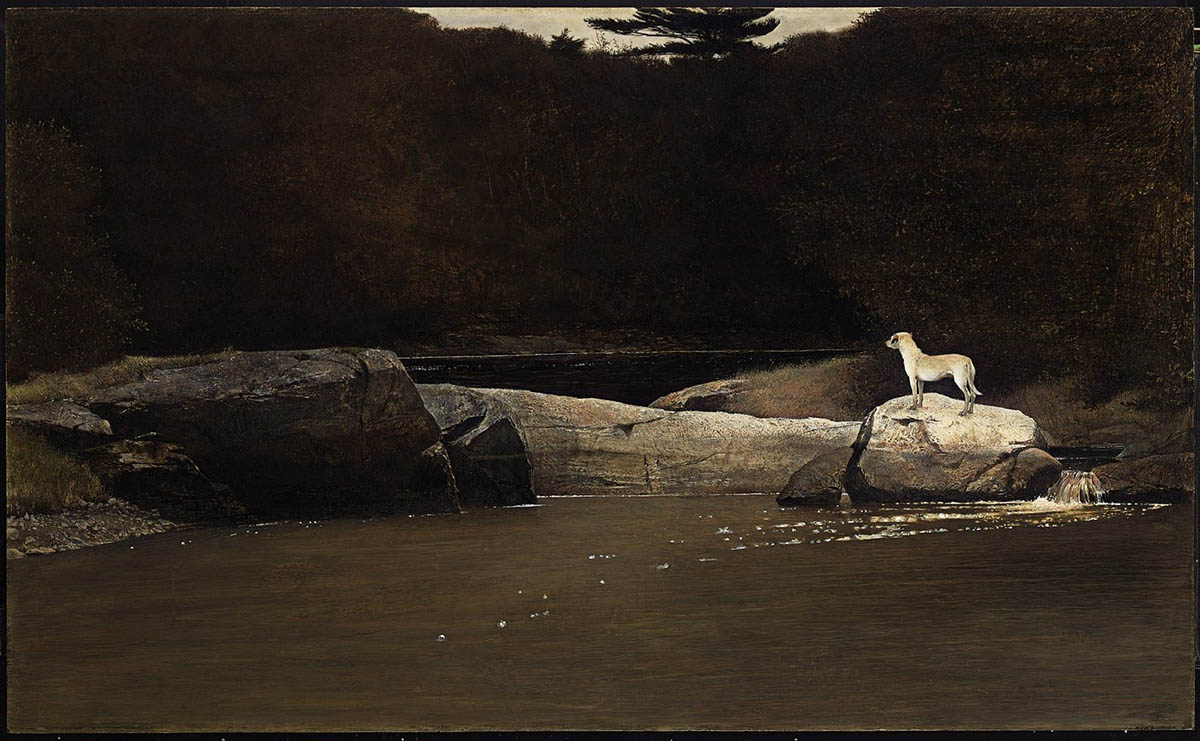 A dog can never tell you what she knows from the smells of the world, but you know, watching her, that you know almost nothing.
~ Mary Oliver, Dog Songs
Paintings: Andrew Wyeth


… Dogs' sense of smell overpowers our own by orders of magnitude—it's 10,000 to 100,000 times as acute, scientists say... "If you make the analogy to vision, what you and I can see at a third of a mile, a dog could see more than 3,000 miles away and still see as well."
… Dogs can detect some odors in parts per trillion. What does that mean in terms we might understand? … while we might notice if our coffee has had a teaspoon of sugar added to it, a dog could detect a teaspoon of sugar in a million gallons of water, or two Olympic-sized pools worth.
… Experts have reported incredible true stories about the acuteness of dogs' sense of smell. There's the drug-sniffing dog that "found" a plastic container packed with 35 pounds of marijuana submerged in gasoline within a gas tank. T… 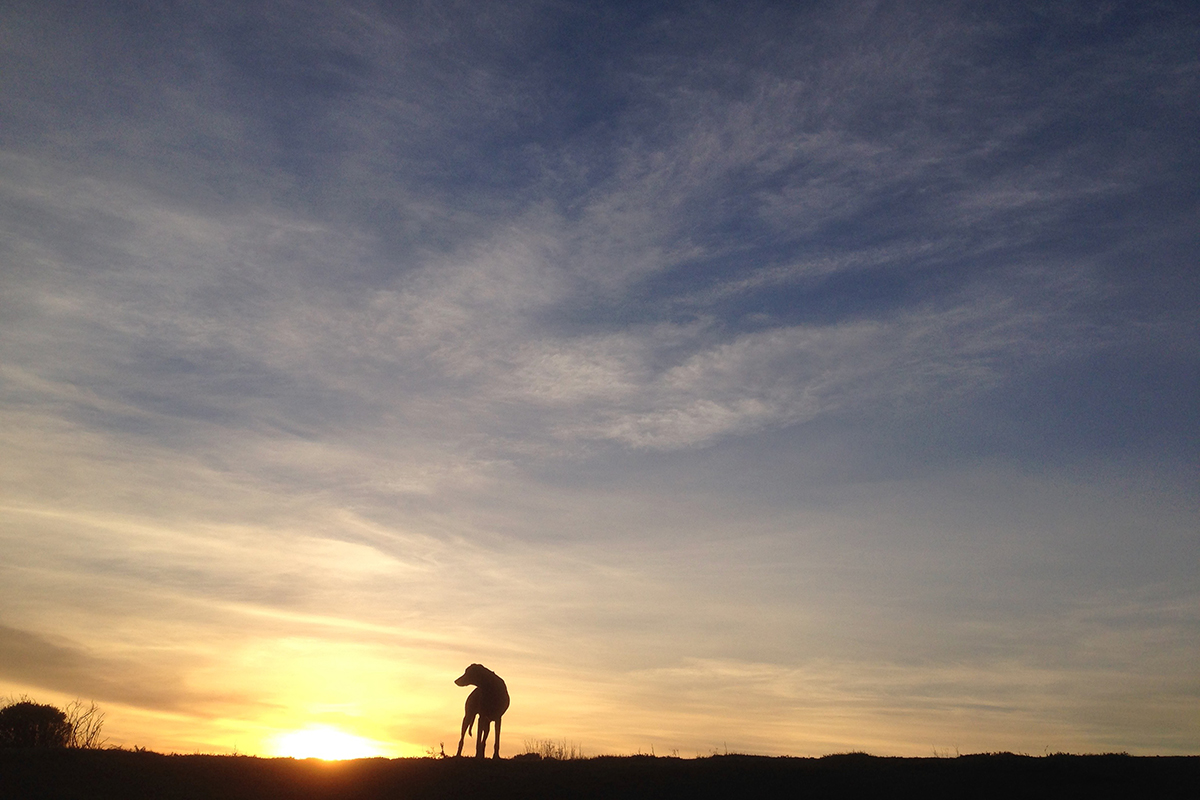 the dog at the gate

The Divine Old Dog is restless tonight    she circles and circles    she licks at her paws    she does not hear her name
is confused and uncertain    she is abashed at her accidents    she tried to say but could not.
Are you at the gate great creature?    are you proud, old girl tired of    this cold winter day
these human needs and dramas    this winter world    does the cold make your legs ache?
Divine Old Dogs accept    the ways of the world    the nature of life
they come when they choose    leave when they are ready    they have all sorts of ways to tell us    when it is time
and they always decide    never us.